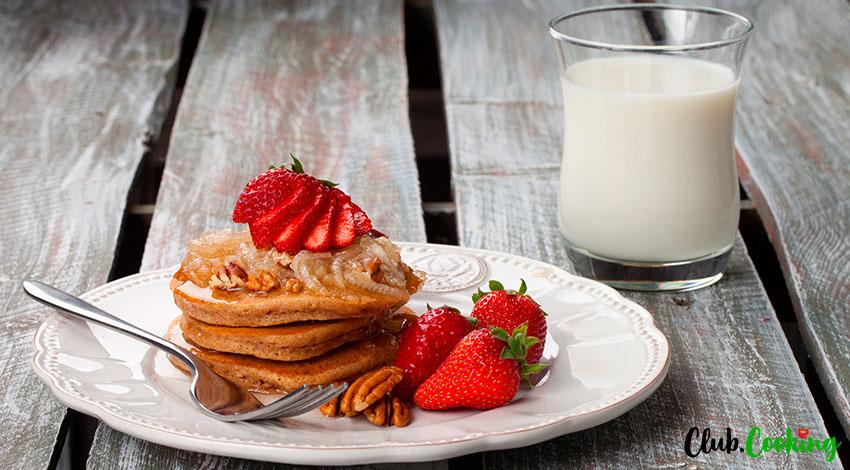 I love the taste and smell of cinnamon and everything with it. I think half of my soaps and shampoos are cinnamon. I love the fact that cinnamon can be put in sweet dishes as well as into savory ones (boy, it is sooo good with meat) so, whenever I see ‘cinnamon’ as part of a recipe name, I stand to attention.

These cinnamon pancakes can be named sinnamon just as well, because they are so decadent, they can easily become your guilty pleasure. But don’t worry, there are plenty of options to make them not only delicious, but also healthy and good for you in a variety of ways.

Not only do you put cinnamon into the batter, you also use it for the glaze and it’s like cinnamon times two for these pancakes. But I don’t mind, put cinnamon on everything, it won’t spoil a thing.

There are a few tricks to making these puppies extra fluffy. First, you can prepare your batter beforehand, like the night before you intend to make the pancakes. It will give the flour an opportunity to soak up all the liquid and acquire a lovely smooth texture.

Use a combo of baking soda and apple cider vinegar if you wish, for extra rise. This is specifically great if you’re using a non-gluten flour variety, those don’t rise as well as regular wheat flour does.

You can also beat the egg yolk and the whites separately. Make sure the whites form stiff peaks and gently fold them into the batter right before you start baking. You can bake those in a skillet or in a pancake griddle, whichever is your method of choice. I hope you enjoy this recipe as much as I do!