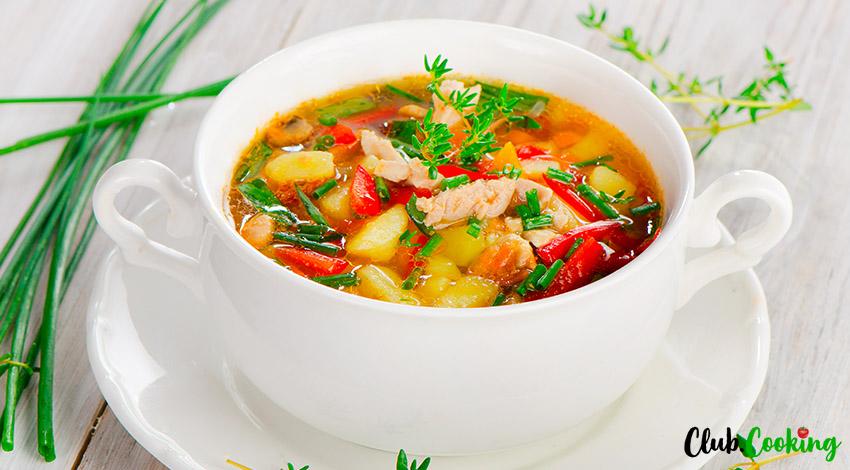 This recipe for Hominy soup or Pozole is one of quick, easy and delicious recipes of dish bursting with classic Mexican flavors of chili peppers and garlic. Seasonings are always more than approved in the cooking directions of mexican kitchen. Pozole is a traditional soup of Mexico, from pre-Columbian days. It’s basically a soup flavored with aromatic and fragrant, blended dried peppers, cumin, garlic and lime. It’s typically made with either chicken or minced pork broth and the key and constant ingredient is hominy.

Hominy is a food made from kernels of corn. The kernels are soaked in a solution which removes the hull and germ of the corn and causes the grain itself to puff up to about twice its normal size. Hominy is the essential ingredient in such staples as corn tortillas and maze and this hearty spicy corn soup. the second among the remaining ingredients is chopped skinless and boneless slotted chicken breasts.

The secret ingredient of this hominy soup recipe which keeps traditional home taste in the soup is chipotle in adobe sauce. Cooker must know it. They are dried and smoked jalapeños in a sweet red sauce. They add a ton of intense, complex, smokey flavors and a heat wave. If you don’t like your soup spicy you can omit them all together and substitute for canned green chillies, or just use the sauce from the can. Don’t cut yourself with sharp cans when using chili pepper or sauce! If you like just a little spicy kick, then make sure to remove the seeds to keep the soup on the milder side.

This soup is a breeze to make. Use canned hominy and already cooked and shredded chicken and the process will only take a fraction of time and a few simple steps. Sauté onion and red peppers, add garlic, chipotle peppers, cumin and smoked paprika, stir in chicken broth, diced tomatoes, hominy and cooked chicken. Add lime juice and simmer for 30 minutes over medium heat. And just like that you have a mouthwatering meal on your plate.

This soup is also all about garnishes. Serve with side of pico de gallo, shredded cheese and a dollop of rich sour cream. The pico really adds unbeatable freshness and sour cream smoothes the heat. Or chop up some fresh avocados and crispy tortilla chips for an unexpected textural contrast. Cilantro adds a pop of beautiful green color. You will not have leftover servings and won`t want eat another food anymore.