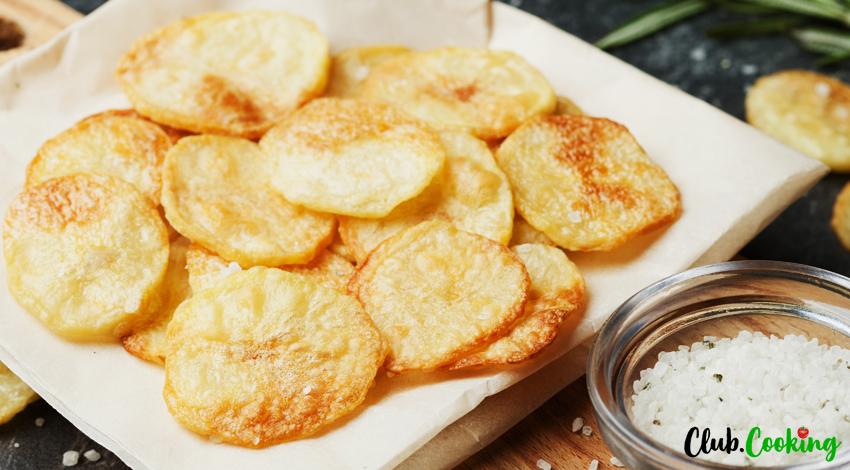 I love potato chips to the moon and back. I know very well that they aren’t your healthiest snack option, putting it mildly, but sometimes I just have to buy be a pack of Lays, or I’ll end.

And yet, each time I buy potato chips, I try not to look at the back of the pack and the ingredient lists. I wish it were just that – potatoes, oil, salt, pepper. Usually it’s just full of stuff I don’t ever want to see in my food, the various stabilizers, taste enhancers and what not. But, what if there’s a way to make your own potato chips and know exactly what you put in them?

This baked potato chips recipe is exactly that. They turn out just as crisp, or maybe even better, because they are made of whole potatoes and not of some kind of powdered stuff. Those are delicious, golden, salty, a great snack you can bring out on a game night or when you have a glass of beer with friends.

The making of these chips is pretty simple. To soften them, you’ll need to cook them in boiling water for a few minutes, and then bake, tossed with salt, pepper and oil. Regulate the quantity of oil you want to use to lower the calorie count, because those puppies can pack quite a bit.

Serve them as they are, as a snack for beer or soda, party food. You can also serve them with your favorite dips, such as salsa or guacamole, sour cream or relish. I hope you enjoy this recipe!